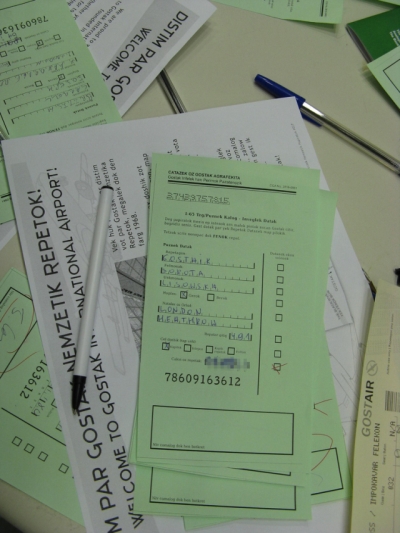 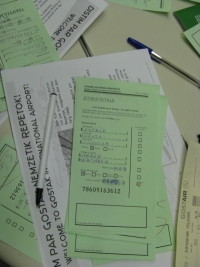 Gostak International Airport was, in retrospect, an escape room game, designed for the Hide&Seek Sandpit in November 2009, to run as part of an evening of games themed around the subject of "translation". Twenty players were locked in a windowless room at London's Royal Festival Hall, and given half an hour to each correctly complete a landing card in a fictional language, watched over by two airport staff who spoke no English.

Each player was also given airline tickets and airport brochures which were written in both English and Gost, and the puzzle revolved around deducing the meaning of each question and instruction on the landing card, by cross-referencing with the other paperwork provided, eliminating some impossibilities in the process, and working from the minimal feedback and occasionally spoken Gost from the two airport staff. The card itself contained precise instructions for how it should be filled in and how players should interact with staff, and a player would only be let out of the room if the entire process had been completed correctly.

Players were free to work alone or collaborate, and could derive some of the game's rules for staff interaction by watching other players attempting to leave. The first player to successfully exit the room won a prize from the airport's duty free.

Gostak International Airport returned to London with higher-quality props and big rubber stamps as part of Now Play This in 2015. It also added pink slip "exit visas", for players who wanted to leave the game without solving it.

The game's title is a reference to Andrew Ingraham's 1903 example of a sentence which has some meaning despite its nouns and verbs having none; "The gostak distims the doshes". (This roughly translates in this game's language as "Gostak welcomes tourists".)