You will need: a set of Scrabble tiles, or some roughly equivalent lettered squares, and a 30-second timer. (If you don't have a timer, you can just play each round until everyone has passed, but a timer speeds the game up.)

Remove all of the "S" tiles from the game (they make it too easy to just add an "S" to every move), and place the remaining tiles face down on the table. Take twenty tiles at random, and - working quickly together, and without thinking about it too much - assemble them into a "legal" crossword grid (ie. a grid of words connecting horizontally and vertically). If you can't place a tile, swap it for a new one. 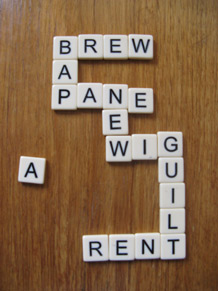 Take a random face-down tile and place it next to the crossword grid, face up (see Figure 1). As soon as the tile is visible, all players begin thinking of ways to rearrange the crossword grid into a new form which includes the new letter. The aim is to include that letter tile in the longest possible word.

Once a player has managed to rearrange the grid in their head, they call out the number of letters in the word that will hold the new tile, and start the timer. While the timer runs, if any player (including the one who's already called) sees a longer word, they may call out its number of letters.

Using the example crossword grid in Figure 1, a player sees that he can turn BREW into BRAWL, using the "L" from GUILT and successfully using up all the spare tiles, as shown in Figure 2.

Without moving the tiles, he calls "five" and starts the timer.

Another player sees a longer word that would use the new tile - GUITAR, as shown in Figure 3 - and she calls "six".

When the timer runs out, whoever called out the highest number must now rearrange the grid to include the new tile in a word with that many letters. Before moving the tiles, that player must announce all of the words that they intend to create this turn. (A word is "created" if it doesn't exist on the grid at the start of the turn, but exists at the end.) There is no limit to the number of words you can create in a turn, so long as you are able to name them all before you start moving the tiles.

The player then attempts to rearrange the grid to create the words called.

In all future rounds, players cannot repeat previously called words. If LENT was called in the first round, no player can use LENT as a called word in future rounds, even if it would be assembled from an entirely different set of tiles.

And as a small common-sense rule - the new tile cannot replace an identical tile in the same position. If BRAWL is in play and another "A" is drawn, you can't remove the "A" from BRAWL and replace it with the new "A", before adding "ER" to make BRAWLER. (But you can rearrange it to make BARREL with the new A, starting from the same B, as the new A is not in the exact same grid position as the old one.)

If all players agree to pass on a round because nobody can see a legal play for the new tile, then the tile is discarded and nobody scores it.

Scores may go negative. The first player to reach a score of five points wins.

Scannergram was inspired by the rapid grid-rearranging Bananagrams game (itself a copy of Pick Two and Syzygy), after realising that one of the most enjoyable parts of the game - scavenging old words and recombining them in clever and unexpected ways - wasn't particularly rewarded in itself, and was entirely invisible to the other players.

Scannergram is still only a few playtests old. We're trying to refine a rule for what does and doesn't count as a "called" word - if you're just stealing one letter from an existing word, it feels like the shortened word doesn't need to be called.

The game might also benefit from a limit on how many words you can call in a turn. Perhaps four. The requirement to call words is intended to limit the amount of rearrangement to however much a player can store in their short-term memory - in practice this has balanced out, but the game might break if one player has an exceptionally good short-term visual memory and can rearrange everything to form a new ten-letter word every round.

If you want a new sample board to get your teeth into, or to challenge a friend online to beat your solution to, there's a Daily Scannergram Puzzle.