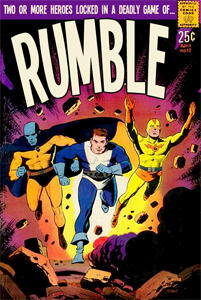 The Rules of Rumble

Rumble is a fast-paced game of superhero combat, with players secretly allocating energy points to attack and defense, attempting to outguess their opponents and knock them out of the game.

Heroes are imbued with original superpowers invented by the players at the start of each game. Powers can modify any aspect of the game, from minor attack boosts to mind-bending gameplay alterations, with the game's auction system keeping power levels in check.

Played tabletop, superpowers are written on index cards, and energy and bids tracked on paper. Online, it can be played through any real time chat system, with a moderator.

Each player in the game has a number of Energy points, representing their Hero's general level of strength, alertness and psychic resolve. This starts the game at 100, and is knocked down by successful attacks. It may also be "burnt up" in the use of the more dramatic Superpowers.

If a Hero's Energy drops to zero or below, they are instantly eliminated from the game. The last Hero standing is declared the winner.

The game of Rumble is divided into a number of rounds, each consisting of a Allocation Phase and a Resolution Phase. To begin with, we'll ignore the Superpowers and look at this core of the game.

During the Allocation Phase, players choose how much of their Energy to assign to Attack, how much to assign to Defense and how much (if any) to pump into their Superpowers. Defense will defend against all opponents, but Attacks (and offensive Powers) should be targetted towards specific opponents. These decisions are made secretly; either noted down on a scrap of paper, or memorised.

When all the superheroes have decided how to spend their Energy, their choices are revealed simultaneously and the round moves on to the Resolution Phase.

Attacks now resolve, and we find out what Attacks were made and whether Heroes' Defenses were adequate. Each Hero totals the Attacks that were made against them this round, and subtracts any Defense they may have made. The remainder is the damage they suffer - this is subtracted from their Energy.

Example: It turns out that Mantisman was Attacked by Doctor Cuttlefish for 40, this round, and by Plastiquegirl for 20 - a total of 60. Since Mantisman only spent 50 Energy on Defense, he takes 10 damage.

At the end of this round, Mantisman's Energy has fallen from 80 to 70, so he only has 70 Energy to assign in the next round.

If a Hero is attacked by two or more other Heroes and is only able to defend against some of the combined damage, the defending Hero chooses exactly which points of Attack to block, and which to take - Mantisman could choose to take the 10 damage from either Plastiquegirl or the Doctor, or 5 from each, or any other division. (This becomes significant if one of the attackers has, say, a Superpower that has extra effects when it successfully causes damage.)

When all Attacks and Powers have resolved, and everyone has updated their Energy levels appropriately, the next Round begins, starting again with an Allocation Phase.

Superpowers add to the game by affecting how the Hero is able to Attack, Defend and otherwise do battle. Some Powers remain in effect permanently, while others require Energy to activate.

Regeneration takes effect automatically at the start of each round.

Big, Gnashy Claws also happens automatically, but only if the Hero uses no other Powers during a round.

Laser Eyes requires the Hero to spend 10 Energy and choose a target during a round's Allocation Phase, giving a damage effect during the Resolution Phase. Energy spent on a Power can't be used to Attack or Defend.

Precognition adjusts the structure of the game to the Hero's advantage by changing how bidding works. Superpowers always take precedence over the basic rules.

Where a Power's text is in the form "Cost: Effect", then the cost must be chosen and allocated during the Allocation Phase, and the Effect doesn't occur until Resolution. Unless otherwise specified, costed powers can be used any number of times per turn.

Some costs simply involve spending Energy in the same way it is spent on Attack or Defense; some require that the Hero Burn Energy - the Energy is lost permanently when spent on such Powers (typically it is the more potent Powers that require Burning).

Example: Mantisman has Precognition, Laser Eyes and Big, Gnashy Claws. He has 70 Energy at the start of the round, and chooses to assign 20 Energy to his Laser Eyes (choosing Plastiquegirl as its target both times), and 50 Energy to keep back for Attack and Defense (using Precognition, he can choose how many to assign to each later).

The Resolution Phase begins. Doctor Cuttlefish is Attacking Mantisman for 30, and Defending for 10. Plastiquegirl is Defending for 95. Mantisman can now assign his Attack and Defense, using Precognition. He decides to put 30 into Defense, and 20 into an Attack against the Doctor. (Because Mantisman used other Powers this round, he doesn't get his Big, Gnashy Claws bonus.)

Before the game begins, each Hero privately invents two Powers and writes them down. They won't necessarily get these Powers themselves, but they'll be available for everyone to bid on. Invented Powers can affect any aspect of the game, and be as weak or as powerful as you like - players will get to bid on them, so the strongest powers will be balanced by costing more. When everyone has created two Powers, they are all revealed.

(For their first game, players might like to choose Powers from the online archive, looking at the 'Classic' Powers, which have been selected for their simplicity. But the game of Rumble is at its best when players make up their own Powers.)

Players then look over the Powers in front of them, and discuss any that need clarification of how they work, or decisions made about how they interact with other Powers. (eg. If Metal Face gives you +10 Defence each turn and Ghost Punch sets a target's Defence to zero, what happens when someone Ghost-Punches a Metal-Faced Hero: do they have 10 Defence or zero Defence?) Agree as a group and amend the wording of Powers as necessary.

When players are ready to proceed, each Hero may bid an amount of Energy (from their initial 100) for each. These bids are made in secret, then revealed simultaneously - the highest bidder for each Power gets that Power and loses Energy equal to their bid for it. Losing bidders get to keep their Energy.

Bid carefully. While bidding 50 Energy may guarantee that you'll win that enviable Bulletproof Skin, it'll also mean that you'll start the game with 50 Energy already gone. You should also be careful not to overbid on everything - while high bids all round will guarantee you some Powers, you may be a pushover if you end up paying for them all, and are facing down some angry 100-Energy mortals with only 10 Energy to defend yourself. And if your winning bids total more than 100, you'll end up dead before the first round even starts.

If multiple players are tied for a winning bid, they secretly decide and reveal their replacement bids: repeat until the tie is resolved. (It may be resolved in favour of a different player, if all the tied players back down.) Heroes can bid zero for a Power if they don't want it; if everyone bids zero on a particular Power, it is discarded. (Further to this, Heroes are permitted to discard any Powers they have won but do not wish to use; this can be relevant for "environmental" powers which affect all players, which can be worth bidding on just so that you can decide whether they happen or not.)

When all bids are resolved and Powers have been assigned to Heroes, each Hero is free to make up a suitable name for themselves, and the Rumble begins...

There are a few useful terms that appear in the Power archive, and which you might want to use in your own Powers:

Burn
Burning is like spending, except that the Energy is permanently used up. It's typically used as a cost for the more potent superpowers. (An example: If Mantisman starts a round with 50 Energy and spends 10 on an Attack, 30 on Defence and burns 10 to activate Laser Goggles, he will - if he sustains no other damage - start the next round with 40 Energy.)
Flaw
If a Power is designated as a "Flaw", then the auction process is flipped around: it is won by the lowest bidder, who doesn't lose any Energy for it, and everybody who didn't win it loses the Energy that they bid. (If multiple Heroes are tied for the lowest bid, they all win a copy of it.) A Flaw can't be discarded when won.
Power Strength
The amount of the winning bid for a Power. This is a general measure of a Power's potency, and may be referred to by the effects of Powers (eg. Devourer's ability of "Spend the Power Strength of a Power: Remove that Power from an opponent at the end of the round.")
Sidekick
If a Power is a Sidekick, treat it as if it were an additional player sitting at the table: they count as a Hero for all purposes, and can (unless otherwise specified) Attack, Defend and use any Powers they might have. The owner of the Power makes all decisions required of the Sidekick, and if the Sidekick is the only Hero left standing, its owner wins.

Some suggestions to keep things moving:-

You can retheme Rumble to any other genre you can think of: just agree on that genre's equivalent of "Energy" and "Powers". We've tried and archived a few genres ourselves, and it's been interesting to see how a change of setting can suggest mechanics you wouldn't have otherwise thought of:

Giant Monster Rumble is similar to the Superhero setting; players are Monsters which spend Energy to obtain and activate Mutations.

Spaceship Rumble is a game of interplanetary dogfighting, with Ships diverting Energy between Attack and (in place of Defense) Shields, as well as whatever Systems the ship is fitted with.

Racing Rumble is any kind of aggressive vehicular race, cartoonish or post-apocalyptic. Players are Drivers, with Energy becoming Speed; Powers are Gadgets, and Attacking and Defending become Ramming and Swerving. As in regular Rumble, when the game is down to two Racers, the one with the highest Speed is guaranteed to win unless their Gadgets can shake things up.

Corporation Rumble takes place in the cut-throat world of global business - Corporation spend their Millions on Lawsuits (Attack) and Counter-Suits (Defence), furthering their empires with acquired Assets, over a number of Fiscal Quarters (Rounds).

Dinosaur Rumble is much the same as Giant Monster Rumble.

Civilisation Rumble has rival nations assigning Attack and Defence to destroy rivals' Territory and maintain their own, with the help of Technologies.

Some of these have been given categories in the archives; others have been written up by slightly retheming the powers to fit a different theme.