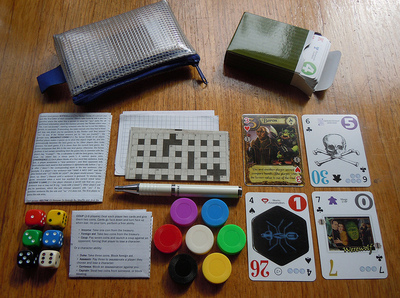 I've been carrying this around for a few years now: a collection of game components that's small enough to carry in any bag or pocket, and which unpacks into a decent number of card and dice games. It's inspired by the huge plastic toolboxes of the Seattle Cosmic emergency games kits, which I admired but never really understood the "emergency" aspect of, until I realised that everyone involved presumably had a car.

This kit began in 2013 as dice, plastic poker chips and a half-sized deck of regular playing cards. In 2014, the deck was replaced with a custom-printed one which included added corner numbers (0-5 in six "circle" suits, and numbers 1 through 35, which is enough to play a lot of things) and scanned-in chunks from games I already owned. It looks a bit baroque, but you quickly tune out the parts of the cards that you don't need for whatever game you're playing.

As of July 2020 the kit stands at 30 interesting games playable with the card deck and/or poker chips, and 83 in the Freeze-Dried Games Pack (a mixed bag of 100-word rulesets for card, dice, paper and word games that I've been compiling on a single sheet of paper), for a total of 113 games.

I've since published a cut-down CC-licenced version of the card deck as The Skeleton Deck.

It all fits inside the pencil case, the chips being bound with two rubber bands in a single stack.

An emergency game of Santorini

Games in and around the card deck:

The kit also includes the rules for 83 small games from the Freeze-Dried Games Pack (Yahtzee, Boggle, Lynx, etc), all playable with dice, standard poker cards and/or a pen and paper. And the deck of cards can obviously be used to play any card game that takes a single poker deck.