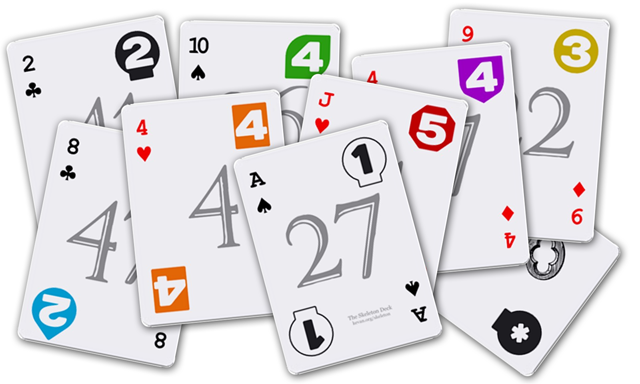 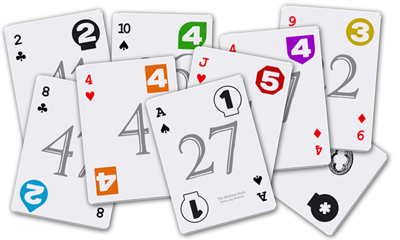 The Skeleton Deck is a bare-bones version of the overwrought custom deck I use in my pocket-sized Emergency Games Kit. After a few people had asked about it, I thought I'd give it a name and some colourblind-friendly suit symbols, and put it up online.

Depending on which aspects you ignore, it's simultaneously:

As well as anything you can play with a poker deck, decent games I know that work with the Skeleton suits are:-

It struck me after making this that the Skeleton suits could be offset from the poker ones so that 36 cards could be used as a Deck of Dice (where the Skeleton number is one die and the poker number the other). I might put up a v2 at some point.

You can order the deck relatively cheaply as an Artscow half-size deck or full-size deck, or do what you like with the pokerless card artwork under a CC-Attribution-NonCommercial licence. (The boring card back design is to stop slight printing offsets from affecting gameplay in secret information games, as Artscow isn't very precise about this. I ordered a few test decks and they seemed fine, apart from the blue suit showing up the offset printing by overlapping the border unevenly.)

The Skeleton Deck is released under a CC-Attribution-NonCommercial licence. The fonts used are Peter Schlemihl and Days Sans Black.